Digital games are a mass medium and can now look back on a history of over 50 years. According to the latest James Study 66% to 77% – depending on the language region – of young Swiss people regularly play digital games.1 Digital games have long since ceased to be a youth phenomenon. In Switzerland, as in the USA and Western Europe, adult gamers are the majority. Digital games form one of the world's top-selling entertainment industries. And they are a cultural asset. As such, they are also increasingly coming into the focus of politics and research. Since the turn of the millennium, the separate research discipline of game studies has successfully established itself internationally. For the longest time, however, research has focused on the history of the United States and Japan. Only recently has a so-called “local history” increasingly focused on regional and national digital game history. Here, it became apparent that Europe, for example, was already characterized by a dynamic and influential computer gaming culture in the early days.

Selective studies have shown that this was also the case in Switzerland. In a pioneering phase of digitalization, not only were there initatives to develop microcomputers such as the Smaky and the Lilith in Switzerland, but also, first on private and individual initiative, and later commercially expanding, to develop digital games that were distributed beyond the country's borders. Meanwhile, game studies is beginning to establish itself scientifically in Switzerland. The Zurich University of the Arts ZHdK was the first to establish its own GameLab and has since hosted a series of conferences and published a succession of various books, recently followed by the University of Lausanne UNIL and the .cole Polytechnique F.d.rale de Lausanne EPFL with their own GameLab. Moreover, at the Bern University of the Arts HKB and at the University of Bern UNIBE, game studies is currently being established as a research field. However, previous collaborations between Swiss universities have only been selective. Our goal is to join forces and explore a largely forgotten history of Swiss digital games as well as to provide an orientation point for individual researchers in Switzerland in the future and to turn these unique and individual collaborations into a lasting practice of cooperation.

Unbeknownst to the public and completely under-researched so far, Switzerland had a vivid game design and development scene already in the pre-internet age. For decades in niche but also with commercial success, digital games have been programmed in Switzerland showcasing many (sub-)scenes and in general a changing society. To address and research these striking and highly problematic lacunae is the goal of our interdisciplinary project, proposed by scholars and designers from all over Switzerland. Confederatio Ludens will be a significant step to not only raise the awareness of “another Switzerland” represented in a developing, completely ignored gaming “industry”. Furthermore, the project is a step to the broader preservation of a highly ephemeral cultural heritage that is currently vanishing. 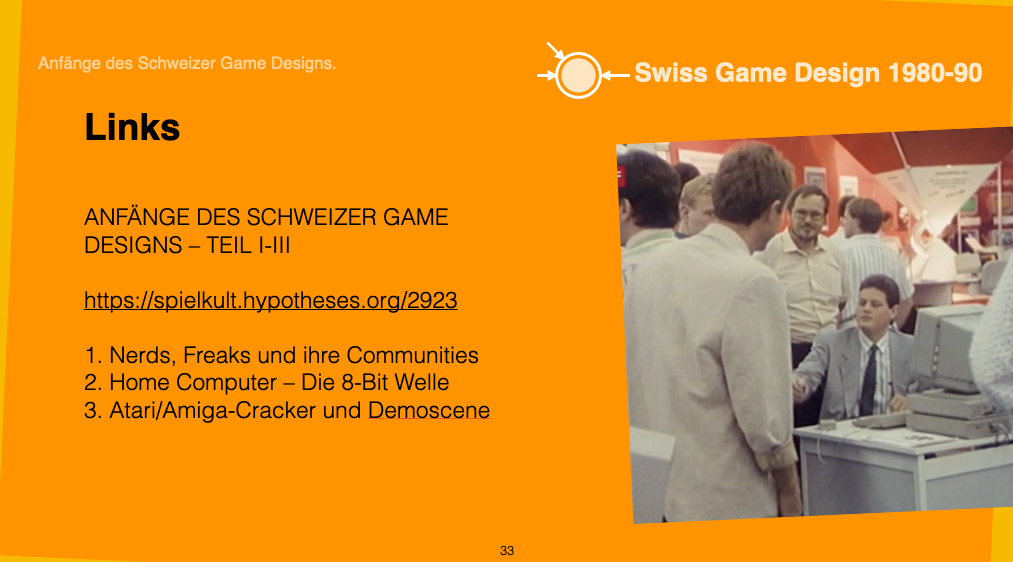